After years of denials of any such relationship the former CIM media organization YesCalifornia announced that it had been working continuously with a man named Louis Marinelli.
A man who’s stated priorities are the de-unification of the United States for the sake of Russian interests, and who sees California independence as nothing more than a way to that goal.
Mr. Marinelli, an American born Russian volunteer operative from Buffalo New York, had helped found YesCalifornia in 2015 but has been living in Russia for the past few years.
YesCalifornia president Marcus Ruiz Evans confirmed that YesCal was renewing and formalizing its relationship with Mr. Marinelli and would be assigning him to its new board of directors as a quote “advisor” end quote. 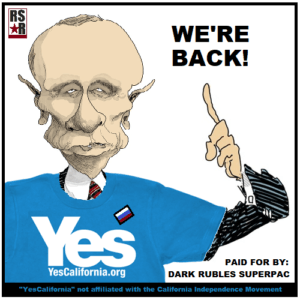 Mr. Evans attempted to justify these actions at a CIM Zoom conference stating that He and YesCal….