The Work Toward California Independence Has Value

There’s a question Californians need to ask that goes “what’s the downside?” of efforts to empower a California democracy over the US bureaucracy as we fight for California independence. Other than failure anyway. For the movement, It’s an honest question. Why do so many people that Californians don’t vote for have the ability to force their bullshit agendas on the day to day lives of Californians.

All of this in the light that California even under draught and in a homeless crisis remains a donor state so our own full resources are not really ours to control. This week Missouri, a state with the 4th highest gun violenc

In Texas, Anti Roe vs Wade legislation and voting rights suppression laws are battling to see which can first get signed, implemented, and then supreme court challenged first, both of which will have legal impacts on Californians.In Florida, their “if you think that’s stupid, hold my beer” governor issued a blanket pardon for all Covid-19 quarantine violations while lifting lockdowns on public events and tourist attractions even as Florida’s infection rates remain higher and vaccination rates lag behind US averages ensuring the possibility of, yet another Florida based, holiday travel, super spreader event.

nia, Wildfire Warnings are going up as rising temperatures due to climate change combine with large areas of overgrown federal wilderness lands under managed by a grossly underfunded U.S. Forestry Service under the Trump administration, that executive order cancelled California’s recently re-granted Air Quality Exemption on a spiteful whim.

I could go on

… But the point is that all of these things work against actual California Values, are complications California doesn’t need, and are initiated outside of California’s control.

The California Independence movement tends to align itself with a number of organizations inside of California that promote Individual rights and social justice issues. This makes sense. Californians in general tend to politically align themselves a bit to the left of center. And that may be an understatement, but I’ll leave that there for now.

The reason the movement does this is that solidarity with likeminded people on issues even when they are looking to D.C. rather than Sacramento helps to grow the movement and define a portion of what we hope a free and independent California will look like.
These other organizations being aligned with California Values even when the US ignores them. 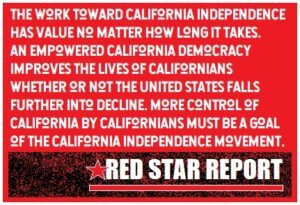 Regardless of the issue, local control here, within California, is the best possible chance for what is right for the people of California. And honestly, for those who argue a poor opinion of California’s government, this truth remains. Even if California elected officials fuck things up or become corrupt, they were at least elected by Californians.