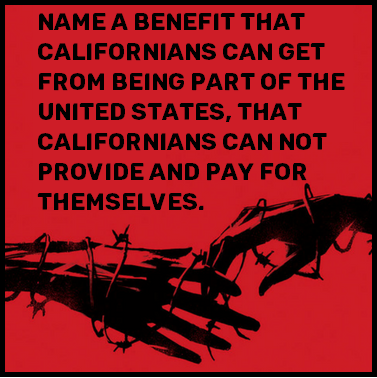 As we enter the fourth of July weekend, I find myself, as a California Rebel, torn on how to feel about the holiday. I loved it as a kid. I still love the fireworks and the shiny, sparkly explosions. I mean, what’s not to love?!?

Even as the cynical activist voice in my soul reminds me that this oh, so American Holiday is like most other things today in the good old USA, a shadow of its former glory, now celebrated with flags & fireworks made in China or in Mexico.

Of course, this is not only true, but somehow oddly fitting.

Shitty spangled banner decorations, poetically being made by foreigners and communists, to celebrate the delusion of American patriotism, in the failing democracy on the edge of national collapse.

And, it’s all bought and paid for by people whose definition of American freedom is based on who they can hate, how much pollution they’re allowed to wallow in, the magazine capacity of their assault rifles, and whether or not they can force other people to live by rules out of a book they grossly misinterpret and swear came from a god nobody can prove actually exists.

Personally, I wish this were funny. Instead, it’s fucking tragic, and its ideals are long gone.

Somehow saying this today just screams the big naïve. Particularly as more and more Californians, seeing that fully half of their fellow Americans really are the bigoted, superstitious, self-centered, cruel, and stupid people we were always afraid they were.

(and) Californians are getting sick and tired of being a quote, “donor state.” Watching the hateful behaviors these “real Americans” as they arrogantly strut around, wave Trump flags, and talk hate for California and Californians while wearing “Don’t California my America” t-shirts and MAGAt hats. Maybe we should update that whole donor state definition thing to something a bit more accurate.

California is an “enabler state.”

An enabler state that is forced to pay red state assholes to hate Californians and vote against California’s best interests? Ask not what you can do for your country? Puleeezzze! What do we have to let that country do to us? Because it seems to involve red, white, and blue knee pads, and no lubricants.

Talking Point: Name a benefit Californians get from being part of the United States, that Californians can’t provide and pay for themselves

The United States gets one-eighth of its total annual revenue from California. Simply put, out of 50 states, California has 12% of America’s population and pays 14% of America’s bills but with the Constitutional bottleneck that defines the U.S. Senate, Californians effectively get only 2% of the actual representation in the Senate, and 8% of the representation in the Legislative Branch of the US Federal Government as a whole.

It’s a legal version of Taxation without Representation that will Constitutionally never change. And, since all hillbilly red stater politicians in the U.S. Senate know this, California, as a state, will always be at their mercy.

With that, and America’s unsustainable borrow and spend capitalist monetary policies, policies that explain why America can have a massive military budget, huge corporate welfare policies, and sweet red state tax charity, but America will never properly fund California’s schools, rebuild California’s infrastructure, protect California’s environment, provide Californian’s with decent healthcare, or support any of the dozens of other benefits that are common in the rest of the industrialized world. Because, these things just aren’t as profitable.

So, simply put, America takes California tax money, and then does as little as possible for California because it can.

And, as just a state, we can’t stop them. So, Sorry Johnny F K, I just gotta ask!

Could somebody please tell me exactly what benefit there is to remaining part of the USA?

I mean, No more bullshit.

What’s in it for Californians, because if the only thing we Californians will ever get out of being Americans is to be fucked over by Red State America because they that hate us, then America has no right to look surprised if Californians inevitably decide to take a hard pass on that whole USA thing.

Oh, and just FYI, and I don’t actually feel bad saying this shit either. You see, I’ve asked the “what’s in it for California” question dozens of times at rallies and events. So far, just about everyone I ask just stands there desperately trying to come up with something good America does for California. Nobody has come up with anything so far.

Except maybe for some of the dumber conservatives where I always get the same basic answer: “It don’t matter, cuz Californya iz part of America and there ain’t nuthin you can do bout that.”

Yeah? Except maybe join the California Independence Movement, right? Those guys really need to work on that whole “your lips are moving and you should stop that” thing.

Because, if there are a lot of good reasons for California becoming its own separate country, and nobody can think of any real benefit for California being part of the USA, then California Independence IS just a question of nostalgia, public opinion, and legal paperwork.

But, it’s Fourth of July weekend, and I’m sure if Californians miss American Holidays, I’d bet China and Mexico would be just as happy to sell fireworks and crappy decoration stuff to celebrate California’s Independence Day from the United States as they are selling cheap ass Fourth of July shit to Americans.

In a related thought, from the “you can’t make this shit up” category, much of drought-ridden California just doesn’t allow fireworks anymore, because of the risk of fire.

As part of that, in what’s got to be one of the most poetic of American ironies, flyers have gone up around cities and towns specifically to remind the homeless of this. Because, I guess, last year there were problems where fireworks were being set off in homeless camps.

Personally, I don’t know which part of this is sadder the idea that governmental officials feel the need to remind people in homeless camps that even one of the few accessible bits of shiny, sparkly, joy is forbidden to them, or that those same extremely poor people somehow still desire to scrape up some of what little money they have, just to burn it on fireworks to celebrate the birth of a nation that has taken everything they’ve ever owned.

So, I’ll state the obvious. It’s Fourth of July weekend in the land of the fee and the home of the slave.

For me, I can’t wait until we have a new Holiday with real freedom and justice for all. A celebration of California Independence where everyone can actually share in prosperity as one of the benefits of just being a Californian.

This edition of Talking Points originally aired on the Red Star Report YouTube channel on July  2, 2021. The Talking Points segment can be found at timestamp 16:49.