Would California Be Better Off as a Free and Independent Country? 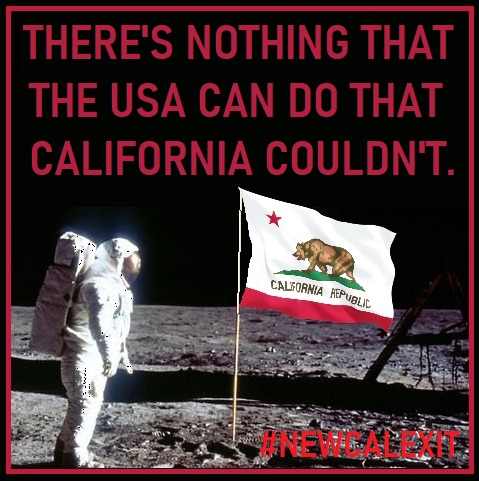 Would California Be Better Off as a Free and Independent Country?

The short answer, of course, is, “Yes!” I mean, hello!  This is the California Independence Movement, so any other response would be a strange answer, right?

I mean, I could use the old California Independence booth event response and say, “It couldn’t be any worse than what we have now and look where the United States is heading. Is that really where we want to be?” But that’s a little obvious, and purposely opens the discussion as an incomplete response for the, what about money, what about water, what about a military, types of questions that follow a purposely nondefinitive answer.

A solid answer goes like this– For those who have actually looked at the justifications for California Independence, the math is pretty clear.

The list could go on and on. As truths go, one could say that 2+2=4, water is wet, and California should be allowed to evolve into its own country.

Q: Do we think California would be better off as an independent country?

A: Yes! Californians deserve to live in a modern, just, fair, and free democracy. But we don’t.

Between the Electoral College, the U.S. Senate, gerrymandering, and voter suppression, the United States, politically speaking, is a losing proposition for Californians. We are forced to live in a country whose government is Constitutionally designed to ignore the basic idea of one person, one vote democracy to unfairly favor rural red states.

For Californians, it’s obvious. We have to live in a growingly one-sided and intolerant US society. One that demands we all act like proud Americans, while shaming our California values and culture. One that subsidizes red states that hate California, using Californians’ tax money. And, to add insult to injury, it happily uses political gamesmanship and a partisan court to do it.

Q: Do we think California would be better off as an independent country?

A: Yes! Because how could anyone honestly doubt that the best move for California would not be to keep our policy making and our tax dollars in California, and to govern ourselves.

California has more people and a much larger economy than Canada and Mexico, almost as big as those two economies put together.  Californians wouldn’t need help paying for government services any more than Canadians or Mexicans do now.

All states are not created equal. Think about it. No other US state, and all but a half dozen other recognized countries in the world, are even in the same league as California.

Would California be better off as an independent country?

Why is this even a question?

Originally aired on the Red Star Report YouTube channel on 11-10-2021. Talking Points segment can be found at timestamp 30:27.