There Is No Border Crisis

On Monday JUNE 7, Former senator and Californian, Vice President Kamala Harris gave a speech in Guatemala, telling would-be immigrants from Central America “do not come” to the United States.

A bluntly imperial statement considering that decades of U.S. foreign policy of constant interference, regime change, and economic destabilization, in Latin America have a lot to do with the socio-political situations that drive refugees and immigrants to U.S. Southern borders.

Her warning probably won’t change the minds of hopeful migrants desperate because of poverty or because of the violence and corruption in countries like El Salvador or Honduras.

Just telling migrants not to come fails to address the involvement by the U.S. government and multinational corporations in Central America creating hardships that spur mass migrations.

Of course, Harris delivered her foreign policy speech to Latin America from Guatemala whose president Alejandro Giammattei is friendly with the new U.S. administration.

A Biden administration that most Californians think has been too slow to reverse, Trump’s hideous immigration policies including the caging of large numbers of children formulated by ultra conservatives who temper tantrum about an immigration “crisis” to justify their hatred of brown people.

Still, the United States will continue to enforce Trump’s implementation of Title 42, as one of the most restrictive immigration strategies ever implemented at the U.S.-Mexico border.

Trump said, “don’t come” and “if you do come, we’ll separate you from your children”….

So, saying don’t come, hasn’t actually worked yet. But it does tell the world that America remains cruel and refuses to take responsibility for the mess it’s made in Latin America.

Talking Point: There is NO immigration crisis at California’s border. Trump’s Wall was just a white supremist campaign promise to his intolerant base.

A testament to American fear and cruelty, and a permanent monument to Trump’s bloated ego that defies the values of all true Californians.

There is an American made Humanitarian crisis at the border created because of white replacement fears and implemented in the name of maintaining a barely veiled racist delusion that the south-west was somehow ever going to act as a walled off bastion for an Anglo-Saxonized America.

Let me ruin that book for you… In the long-checkered narrative of California and the rest of the south-west it was never going to remain majority white.

Historical, biological, geographical, sociological, and environmental factors all align against that.

So, speaking as a Californian, in this increasingly diverse Nation state, do we need to help Latin American refugees and immigrants?… Of course, we do…

For growth and development as a nation, do we need immigration into California… Of course, we do. 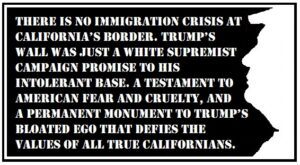 Is putting kids and their families in cages ever a good thing?… of course not!

Do we need cruelty and horror to protect our border?… of course not!

And I don’t Care what cool aid she may drink or what US political expediencies she’s catering to. You would think that Kamala Harris, a former California Senator, a daughter of immigrants, California born and raised, wouldn’t need to be reminded of this…

So let me be clear.

If any California Official that has left our nation state, to go off and serve the US federal government supports these cruel immigration policies?

When your tenure as a US official is over and you’re considering returning to California?