Is Supporting California Independence Really a Matter of Choice?

I know, I know, in California independence circles we usually talk about legal secession through Constitutional means. The path we’d like to walk to a free California nation always goes the same way. Californians vote to secede through either the initiative process or a bipartisan state legislative measure of some kind, based on a majority consensus. Then Sacramento does lots of legislative stuff to certify the legality and desirability of a consensual “divorce” from the U.S.A. California would then lobby the federal government to get a majority vote of the other states favoring California’s leaving the union. Then the President signs it and…
Who are we fucking kidding! 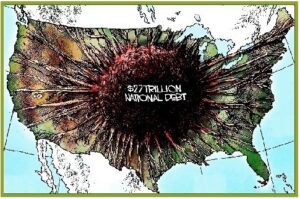 Californians in general wouldn’t trust the federal government to order pizza! And why should they? From Covid-19 to social justice, and from fracking to international relations, if federal officials could be trusted to do anything right, fair, or beneficial, California wouldn’t need to leave the U.S.A. in first place!
Let’s get real! Although a lot of people in the Independence movement see “legal secession” as the primary path to California’s freedom, it’s probably not the most likely scenario.
Right now, despite what will probably be a short-lived Biden honeymoon, the pandemic, environmental catastrophes, and political division are likely the biggest issues that exacerbate America’s economic and governmental failure. They are also the most likely factors to force California into independence.
The truth is, financial collapse is the great killer of modern empires. The U.S.A. is rapidly approaching $28 trillion in national debt while routinely running trillion-dollar annual deficits. It’s the very definition of fiscal irresponsibility, and a moral injustice, where unfair U.S. fiscal policy has starved California’s future prospects for the next generation’s prosperity.
Worse still, while California as a “donor state” has seen no real benefit from America’s “borrow and spend” national debt, Californians have suffered considerable economic damage as America subsidizes red states to reduce or even eliminate their state taxes. This allows them to lure away California’s people and businesses.
America has remained on an unsustainable fiscal path to collapse for years with tax policies specifically designed to harm Californians while they institutionalize insufficient revenues to meet America’s financial commitments… It’s insane!
Simply put, the United States of America is the wealthiest nation on the planet. But because admitting that trickle-down economics is a failure, and actually doing something to fix the mess might inconvenience the obscenely wealthy, the federal government’s modern borrow and spend policies have left the United States financially underwater.
To make matters worse, for the last 30 years America’s out of control spending and unstable economic policies have been argued by a corporately sponsored, politically divisive, and all but gridlocked government that can’t really get anything done. Unless that changes dramatically, America’s eventual political and economic collapse is as inevitable as it is unavoidable. 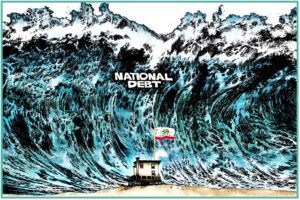 When this happens the only choices Californians will be left with are a future locked in submission to America’s economic collapse or independence and global economic leadership as our own separate California nation.
So, ask yourself this. Is supporting California independence really a choice when in the future there might not be a functional U.S.A. to be a part of?