Tonight’s theme for Voices of the California Nation is…Independence or Submission…
In what could be a disturbing Calexit comic book style development for an occupied California, if we remain part of the United States that is… 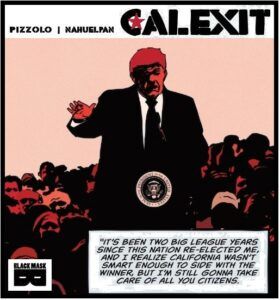 Donald Trump is outlining a new MAGA manifesto for the Republican party for the 2022 midterms, and his very likely re-run for president in 2024.
The disturbung part? The forward to the past base template for Trumps new America First Republican platform.
The undeniably dog whistle conservative 1994 “Contract with America,”
To make things both more creditable and worse… Trump’s teaming up with 1994 Contract architect… That’s right… White evangelical hero, evolutionary throwback, and sworn enemy of the California Republic, Newt Gingrich, to get it done.
Trump & Gingrich met this past week with former corrupt white house chief of staff Mark Meadows and Sen. Lindsey Graham at Mar-a-Lago to begin codifying a Trumpified “America-First” platform for the Republican Party on everything from trade to immigration to criminal justice.
Referring to it as “a policy priority for 2022 and beyond.” … How retro catchy is that?
When asked about this “retrogressive” Republican agenda, Gingrich gave a vague but concerning sample list of Conservative, totally not 1984 double plus good Fascio-speak priorities. He Said:
“It should be (which means sound) positive,”
It should teach American (as in whitewashed) history for real.
It should abolish the ‘1619 Project. Which means denying America’s leading role in and the impact and evils of slavery in the countries founding.
It should eliminate critical race theory. So, deny the very existence of institutional racism in America.
And whatever the Texas legislature is doing. We should say, ‘Bring it on.” (voter suppression)
This isn’t surprising. Btw … In fact, it seems like a match made in blue-eyed white Jesus’ conservative heaven. Newt’s 1994 “Contract with America” focused on attacking minority welfare recipients, politicizing child support in poor communities, tort reform to weaponize the criminal justice system against minorities, and, of course, tax cuts for corporations and the fabulously wealthy…
This goes with “Donald Trump’s anti-Immigrant, anti-environmental, Anti public school, pro-police brutality, Pro-fossil fuel, pro-military industrial complex, 2016 “Contract with the American Voter” like the big mac and fries Trump probably had for dinner just prior to Melania’s nightly headache and Marlena Dietrich style “I want to be alone” impersonation.
And it also preaches to the same deranged MAGAT faithful as the Trump administrations recently canceled, US funded yet white supremist cherry picking rewrite of American history outlined in Trump’s idiot’s cliff notes-slavery apologist- edition called “the 1776 report”.
A 40-page US heroic propaganda document Joe Goebbels would be proud of.
So, loaded with plastic flag patriotism stuffed so far up its ass that one university history professor described it as sounding like most of it was lifted from moldy 1950’s, McCarthyism era, elementary school history book…
I don’t recommend it as a must read, but it is pitched down to a perfect intellectual point for today’s MAGA supporter comprehension level…
No Doubt the lesser American would find this piece of… Historical fiction, comfortable and quotable.
So, what does this mean?… well, If the Trumps Mid-century Fascistanistas get their way…
California has 18 months before the US government grinds to another gridlocked halt.
You should know that Trump, California’s public enema #1 has been fundraising with Republican deep pocket donors for months, and If you’re paying attention, his hold on the Republican party has reached cult if not messianic status.
All this because he knows his future in politics and his personal freedom from prosecution is vested in the Republican Party’s success in the coming midterm elections. So… No pressure.
For Republicans, the goal for a Trumpian nightmare reboot is just five seats in the House and one seat in the Senate to clutch and gear grind congress from D to R.
Then they can Obama Block Biden, and McConnell lock down any progressive legislation, or policies, California needs on homelessness, climate change, immigration reform, and so on, for the next six to eight years if Republicans can rig it, and…
Let’s face it, recent history indicates they will if they can…
They’ll give in to their baser political instincts to make White Christo-Conservative rule, all but permanent in America.
As a Californian look out to the horizon, to the real possibilities Californians will face if Trump, or an even Trumpier fascist, is elected in the coming “you already know it’s going to be rigged” 2024 presidential election that Conservatives are voter suppression legislating all over the U.S. right now to insure, and a conservative Supreme Court is unlikely to challenge later. So, if that isn’t where you or your children would want to be, ask yourself this week’s CalExit question.
California Independence or American Submission? (There will be a test later…trust me.)