One of the most pervasive arguments we make in the Movement for California Independence is… America… can’t… be… fixed. No matter what Republicans & Democrats say.
No matter what the media says as it relies on the DC Circus to put clowns on your TV night after night tries to tell you… it’s true.
Let’s shine a light at American Social Justice.
In a Minnesota court, we recently watched as America proved it only takes 11 months, a thousand BLM marches, and ceaseless media barrage of indisputable video footage showing the coldblooded murder of a helpless black person, for a Killer Cop like Derek Chauvin to be found guilty on all counts in the brutal homicide of George Floyd… Fuck! Fuck! Hooray!
As the USA exhaled in what many saw as a long overdue “and justice for all” victory moment…
Police across America celebrated that event by executing 6 black people, less than 24 hours after the Chauvin verdict was announced. That’s the thin blue line’s lil way of reassuring Murica just… “who’s gettin protected and who’s gettin served!”
So, what am I getting at? Red Star Report is shamelessly dedicated to the eventual independence of California. A truly free country that may, finally, live up to the ideals of liberty, peace, democracy, and prosperity, in a real nation, of the people, by the people, and for the people… That means ALL the people. A truly just, fair, AND diverse nation that the USA, 245 years after a bunch of slave owners had the fucking nerve to write “All men are created equal”, has utterly failed to deliver, and is working tirelessly to avoid ever becoming.
To be crystal… I support BLM in the fight for justice and equality against racism and brutality.
I just don’t believe even a million Black Lives Matter marches can fix America’s racism problem. 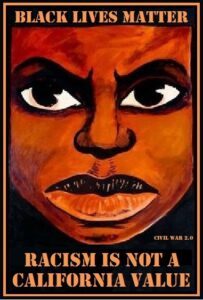 Because excluding California, this racial division shit is what over half of all Americans support, or at least are willing to tolerate.
In 2020, within the margin of error of a 50/50 voter split, Americans barely ended the openly racist & California hostile presidency of Donald Trump.
An utterly corrupt shit creature who started his campaign with a cowardly and openly racist attack on immigrants & people of color.
Trump’s candidacy in any non-failed democracy should have been laughed off as a bad joke… (Caitlyn Jenner for Governor?)
But not in America. Even in the 21st century.
Unfortunately for we California Rebels, although we see how Independence might deserve some love from BLM and other human rights groups as a viable alternative to America’s failure to evolve,
Most Californians are still in the sugar-coated honeymoon stage of the Biden/Harris win.
They were woke for 4 years, but now it’s past their bedtime.
They’ve gone back to sleep in the comfy delusion that somehow both, the fight for basic human rights and the evolution of California’s Independence are no longer needed…
I get it…. After 4 years of Trump lies and dog whistle politics, and putting up with his inbred, fascist, racist, superstitious, MAGAt followers on the news night after night, his defeat feels like there was some vindication for the USA to be had. But that’s ridiculous. Rosy notions that a razor thin democratic victory, only made possible by monumental African American efforts taken in Georgia, is going to finally FIX a constitutionally broken USA are a joke.
Bad news Californians! Half of Americans wanted, and still support Trump’s disgusting vision for an “Anglo-Saxon-ized” America.
Without the vote of Californians, Trump and his Grand Old Party allies would have easily won in what’s left of the Good Old USA, and those white supremist MAGAts are still there.
They haven’t crawled back under their rocks, or given up, or suddenly evolved, since they lost the last election. If anything, they’re even more Q-sane, militia radicalized, and privileged desperate, than before. Hell, They stormed the capital.
And these “people” believe Californians and people of color, are enemies of America trying to destroy their random gun violence & gross polluter based free-dumb with the socialist evils of equality, higher education, renewable energy, and universal healthcare. They’ve even convinced themselves that scrapping the fundamental principle of “one person\one vote” democracy is somehow ordained by god if it can save their illusions of a strong  white America, even as they deny racism in America even exists.
As Californians we can see it.
They aren’t even trying to hide multiple new white supremist voter restriction laws in red states that dared to cost their Ober-Trumpen-fuhrer the 2020 election.
And to make sure it doesn’t happen again, legislators outside of California have taken up the Trump battle flag and introduced 360 new voting restriction bills in 47 states.
Just to make absolutely sure it’s hard for black people, poor people, young people, and people of color in general, to vote.
They’re gonna can take back America… again…and again… and again… even if they have to cheat where necessary.
And there’s never going to be any Progress. American politics is just a right to left swing cycle that never moves forward, and never ends. 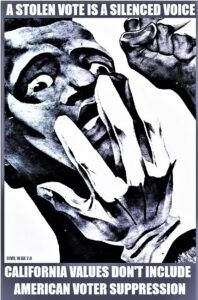 From whippings to lynching’s to shootings, America’s racism has been there, in one form or another, for two and a half centuries and that’s the way 49% of Americans want it So even if Biden’s win feels good, the American reality is it’s only good till the next Federal election swing.
As Californians we must recognize the facts.
It’s been 50 years since Martin Luther King’s dream should have made Black Lives Matter unnecessary.
It’s been over half a century since the signing of the voting rights act, but America just had to roll those rights back again.
And It’s been 30 years since the Rodney King beating, but that thin blue line will execute another person of color without cause somewhere in the USA tonight… That’s the American reality… But it’s not the California Dream.
No, Like Martin Luther King’s Dream, the dream of California Independence is for a better future, has no expiration date, and both dreams share promise, hope, common values, and an inevitability. Californians…. Consider the future.